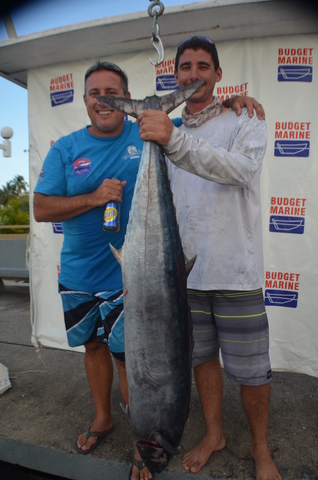 The Budget Marine and TTGFA Wahoo Blowout 2017 was held on Saturday 11th and 12th 2017 out of the Trinidad and Tobago Yacht Club, Bayshore.

Hampered by rough waters experienced during the two day tournament, sixty six anglers competed on seventeen boats, bringing a total of five fish to scale including one Wahoo, three Dolphin and one Kingfish. Certainly not the ideal for the eager participants. Next year the TTGFA will look at scheduling the tournament at a possibly more ‘productive’ and calmer time in terms of mother nature.

Team ‘Dilligaf’ with anglers Robert Auerbach and Geoffrey Pollard was awarded the Best boat and Heaviest Wahoo prize, with their catch of 37.25 lbs.

Treasurer of the TTGFA, Alan Sheppard thanked the title sponsor Budget Marine, along with other major sponsors, Carib Brewery and the Ministry of Sport for their continued support. The Assistant Director of Sport, Mr. Ronson Hackshaw, who attended the prize giving function, commended the anglers on their successes and commended the Association on once again maintaining a high standard of competition.