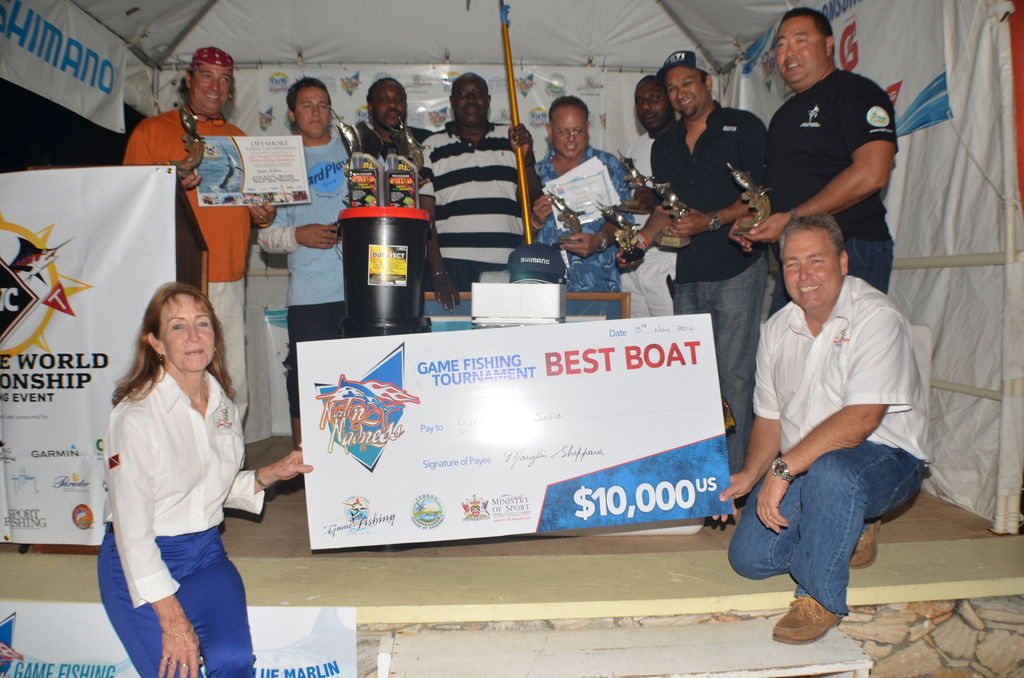 The Trinidad and Tobago Game Fishing Association’s 34th International “Marlin Madness” tournament that was held on April 29th to May 3rd at Pigeon Point, Tobago was again a huge success. The Ministry of Sport, the Tobago House of Assembly and Carib Pilsner Light are the main sponsors of the tournament.

Captain Victor Sinarine and crewmembers of team Victory made a good start on the opening day by reeling in a massive seven hundred and seventy-five and a half pound Atlantic Blue Marlin. Farouk Ali was the lucky angler that reeled in the monster catch. Hundreds of locals and tourists gathered on the iconic Pigeon Point jetty to get a glimpse of the trophy fish while it was being hoisted on the IGFA certified scale. This was all being done under the watchful eye of international judge, Pete Tyson. However, despite the many rounds of applause that the big haul created, it did not put team Victory in a winning position at the end of the first day. Instead, it was team Houdini, Captained by Alan Fitzwilliam that had the honour of leading the pack of twenty-three teams.

Alan, along with crewmember, Christian Valdez had reeled in two Atlantic Blue Marlins each to put their team in first position when all lines were pulled in at four thirty in the afternoon.

Team Houdini had no releases on the second day so they relieved their top position to Bounty Hunter. By the third and final day, it was Captain Gerard “Frothy” de Silva on board his new vessel Gold Spoon, which stole the show and was awarded best boat of the tournament.

At the prize-giving function, which was held at Crown Point Hotel, the Director of Sport at the Ministry of Sport of Trinidad & Tobago, Dave Bobb, thanked the many anglers that came from all parts of the globe to participate in the annual event. Some travelled from as far away as the United States of America, the United Kingdom, Scotland and other parts of the Caribbean.

Of the one hundred and fifteen anglers, only one was female and two were junior anglers. Between them all, they released a record eighty-three billfish: sixty-six Blue Marlins and seventeen Sailfish. Only one Blue Marlin made it to the scale as the minimum weight was increased by the TTGFA from five hundred pounds to seven hundred pounds this year. In all, there were more than two hundred billfish strikes.

The year 2013 was an eventful year for the Trinidad and Tobago game fishing fraternity as a grander was caught for the first time in any Southern Caribbean tournament. Young Brendan Bernard of Trinidad reeled the monster catch in on board Predator. In 2008, the junior Atlantic Blue Marlin world record was broken by another Trinidad born angler, Sean Mendonca. With this year’s big catch, Tobago is once again on the world map as one of the top fishing destinations.

At the prize-giving function, the president of the TTGFA, Marylin Sheppard complimented the teams for their outstanding performances in breaking all previous records for total billfish caught in any tournament in Tobago and reminded anglers that the future of the sport relies on them using circle hooks. She pointed out to anglers that these hooks are more successful than J hooks in hook up ratio and the fish almost never get deep hooked.

On the night of prizegiving, the TTGFA also gave a donation of TT$10,000 to Healing with Horses charity in Tobago.